The Day Before The Music Began

Tomorrow is NaNoWriMo. Or at least, Day 1 of NaNoWriMo. Alarm set for 8 am, I'm ready to tackle a month of extreme novelling; The Wedding Singer will follow up Meet Sam, with less of a main-character-hearing-the-narrator feel to it. However, I liked the narrator last year, how I wrote with her voice in my head, so I'm going to write like that this year too.

I have my first sentence, which will be posted here tomorrow night. I'll tell you this though - Sophie Byrne will wake up at the same time as me. She'll live in the house across the street, sing her heart, break it a few times, fall in love, love a dog (but in a different way) and follow the ChartJackers. Yes, the ChartJackers.

Now, onto business. Darren Shan (AKA my HERO!!!) agreed so many months ago that I could Interview him. We tried to offer it to the public... they essentially said no. Soooo we're letting the public ask questions instead! I've announced it on Twitter, on Bebo and on the forum (better mention it on Facebook too!) - follow the hashtag #q4shan on Twitter to see the fans' questions! I'm super excited about this one, and will even try get to Limerick to see him for the Interview.

An idea arose the other day when the lovely Rachel Phipps came looking for an assignment for the Literary Den Magazine. I suggested something on an Indie Bookstore that was local to her, and from there, my idea expanded. What if we followed a different Indie Bookshop each issue?

That's where y'all come in.

I need volunteers to go to their local Indie Bookshops, or even just their local bookshop if it's not Indie, and check out a few things (details to follow, upon signing up). One important thing I need though, besides your valuable time and questioning of booksellers, is a photograph. Don't worry, it doesn't have to be you in the photo (generally if one is taking a photograph, one isn't also in front of the lens). No, I want the photo to be the view of the shop from the front door, or the view of the front door, or the most interesting point in the shop. The photographs will then all be put together as a collage to build up an important image for what could very well be the first cover of the magazine.

So please please please help! Anyone who does will be entered into the draw for one of three signed copies of our 2009 Anthology, upon submission of the final piece. Simply email me at literary_mania(at)yahoo(dot)ie and tell me you're interested.

On Sunday, I met my hero.

Darren Shan, in the flesh, signed my books.

Darren Shan choke me for a photograph. 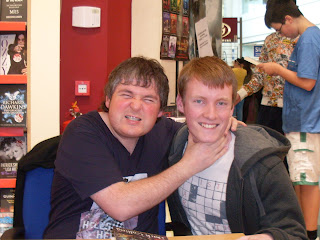 Now I'm going to direct you to this video, which contains the inscription he put in my book. Hoo hoo I'm so happy!

And with this short blog post done, I bid you adieu!

The End is Nigh. The Demons are here, the heroes are falling, the world is at its end. So not much has changed then!

Darren Shan, the Number One Master of Horror (as far as kids are concerned) released, just 10 short days ago, the last book in his best selling Demonata Saga. 10 books, three protagonists, millions of demons, magic, science and all sorts of spiritual mumbo jumbo later, and I still love them.

to go off with a bang. WARNING: SLIGHT PLOT SPOILER It slowed down a bit at the end. No big battle, but mainly because that would have undermined everything Shan had led the story to. He couldn't use the big weapon to kill the Demonata, because that would mean that it could have been done very easily in the past instead. And there would have to be a cheesy party at the end, which would have resulted in literary suicide for Mr Shan. His characters can never be eternally happy. That wouldn't work. That wouldn't make his fans happy. So in short, the ending was neat, tidy.

The rest? Fantastic! I still like the ending, but the rest of the story was.. wow! Blood, guts, vendetta, betrayal, death, Death and more DEATH! What more could you ask for?

It's suitable for children. I should point that out. Not very young children, but anyone 11 up should be able to get through this book without being too scared. There are far worse things out there than Demons in books. Afterall, it's an episode of Doctor Who that stops kids from sleeping (Blink). Darren Shan.. well, he's never kept me awake with fear, but he has turned my stomach on enough occassions. And I love him for that.

The man is a legend. Pure and simple. And the book, the SERIES, is a reflection of that greatness. When I say he's my hero, I mean it - I want to be like Darren Shan if I ever get published. Not physically, obviously, because I'm happy with how I look. The popularity...well that's always nice for authors. But the way he deals with his fans - that's how I want to be. I want to go on big signings because fans love that sort of stuff. I want to answer emails and write letters and blog and all that stuff that lets fans keep in touch. Because he does that. He keeps in touch more than any author I've ever had the good grace to read (except perhaps Samantha Priestley, but she's my good friend via the Internet, so that doesn't count.)

Read the books. You will love them, especially the early scenes of wonderment and gore. Lord Loss - plenty of stuff to start exploring. Demon Thief - oddities you've never imagines. Slawter - the first taste of Demon power on earth and what it can really do (and lots of blood!). Bec - the history of it all, in ways you never imagined (my personal favourite!). And it keeps going on. From that point, the stories are cronological, and fantastic! I'm 18 and I still love them, so you have no excuses!