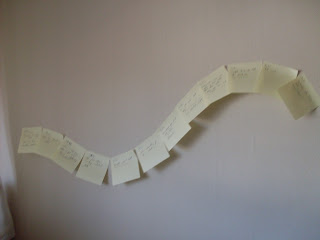 My bedroom wall is a mess of post-its and madness. The snake is long, 53 post-its long. Yes, 53. It started off looking like this:

Let me explain; I'm story boarding. This is the first step in my story boarding. Each post-it is a chapter in the book. Admittedly, that's a lot of chapters. Especially since it's not a very long book. But still, the chapters themselves are important. I might add, though, that there will probably be more chapters. This line of post-its on my wall is based on the first draft; the second draft of the book, which has been added to already, requires that I add more detail to certain areas of the book. 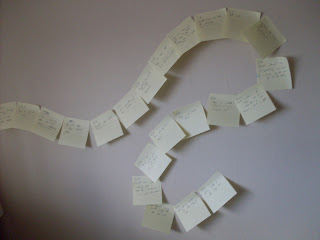 The story board became something like this, then. As you can tell, it's a bit wibbly-wobbly. These post-its were very kind, though. They stayed in the right place... mostly. The ones under the loop are evil and kept deciding to move. So I stuck one of them there with blue tack. At this point in the book, there has been a lot talking about something happening and a comparison between two of the female characters. It's a relatively small cast of characters, I might add. Because the book was originally only fifty thousand words long, I didn't want to get trapped by lots of voices all trying to speak. 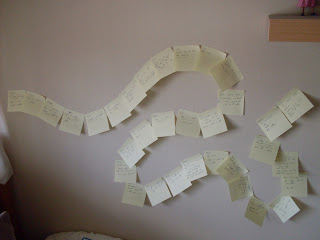 The snake grew longer. It's sort of like the game on old mobile phones, with all snake getting longer the further into the game you get. The post-its increase in number as time goes by in the book.

This is all Meet Sam, I might add. It started off as a simple idea, and became something more than I thought I could handle. At this point, the second draft calls for taking from recent experiences with doubt and depression and writing an emotional and mental breakdown. I wasn't ready for something like that a few weeks ago. Now, unfortunately, I am. 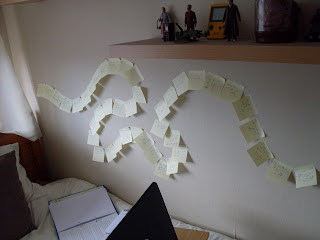 That seems like I'm complaining about being able to write my own book. I suppose I am. I've had a tough summer, but it's allowed me to have a look at a more human way of dealing with the world. It's not all just words anymore. This book is becoming a transformative experience of its own. It's allowing me to look into the life of my protagonist and apply my own problems accordingly with his. Circumstantially things are different, but the end result of deep despair is the same. However, the snake unwinds. Things aren't all jumbled up madness, anymore, in the book. There's some sense being made in Sam's life. 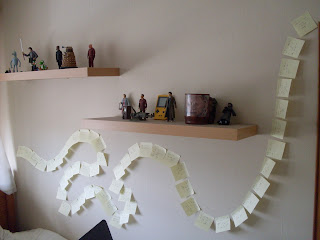 And finally the snake climbs. This is because, despite everything, there is a happy ending. Or at least, there's an ending of the current tale. I have already expressed my wish to write a sequel or two to this book, once I'm sure of what to actually write for them. The snake won't last that long, of course. I won't be letting a rain of post-its come down on me in my sleep for the sake of planning a trilogy of books based around the life of a writer. However, the image will always remain. This is my book, ladies and gentlemen, in its simplest form. It's winding and crazy and falling apart in the wildest part, but it's all there, all together, and it does appear to have an ending.

Over the next couple of weeks, I hope to add to the idea of this snake; there are chapters that may be added - inserts into the time-line - and ideas and relationships to explore. We are not our fathers and we are not the sum-whole of our parents' wishes. I think that's one of the things I really want to get written in this book. Sam's escape from his house, while still bound by its walls, is perhaps one of the things I really need to elaborate on. His ability to deal with his own depression, too, needs to be looked at, and the reasons behind everything. Furthermore, I need to develop his relationship with his cousin, Nick, who is in fact the real hero of the story. He's the one constant friend in Sam's life and he plays the biggest role in keeping him safe. Nick is the brother Sam never had.

I do hope you've enjoyed this little insight. I didn't actually intend on discussing the book, but in doing so I'm getting a better understanding of it for myself. So, two weeks until I go back to college. After today, that means I have nine days to work on the book, because I work weekends. Today will be a note-taking day, I think, and a re-examination of what I have to write. Edits for draft two will work on getting the new and the old pieces of writing to fit together into one book. I think my Sunday mornings could soon become Novel Writing Time, when I go back to college.
Posted by Paul Carroll at 8/30/2010 04:01:00 PM

Wow, that is awesome! Your wall looks better that way. I don't do that with my book. I prefer write everything on a notebook and then on computer. You get a very spontaneous book that way, that'll surprise every reader. And if I want to change something I just write the changes with another color so the next time I'll write a book, I learn not repeat those mistakes and write everything in a shorter time. I suggest you do that. I was skeptic before, but then I realized it's better that way. Keep your notebook and pen all the time with you and never stop writing. Good luck!:-*

Ha, I have a whole heap of notes written down for when I first wrote the book. The post-it trail of novelling is for editing. I have a few things I need to add to it, so I just wanted a handy and slightly crazy way of referencing where they all go. :D